October 09, 2017
Kids are really different. This becomes more apparent when you have more than one, of course. Our first learned different words at a different rate, walked later than the second, is a much more fluid dancer but also a little less adventurous. She also used to hate going to bed (still does most of the time, though it's not as bad as it used to be); but once you got her to bed, she was out for the night. We got this book, 12 Hours Sleep by 12 Weeks, which was recommended from a work friend. I think it took 14 weeks for us, but it pretty much made the difference. However, once you put her down, you usually had to go back in a few times to comfort her before she would actually pass out. Yeah, maybe we should have just let her "cry it out," but sometimes it's hard to take the sound for more than a few minutes.

Conversely, our second child was extremely difficult at first, in regards to sleep. To be fair, we were in a 2 bedroom apartment and were putting her to bed in our room, and then transferring her to a pack-n-play in the living room once we were ready to sleep. Naturally, that didn't last long and we decided to move across the country to solve the problem (sleep deprivation will take its toll). After a few months, she actually went to bed really nicely. By the time she had her own room, you would hold her for a few minutes and then she would actually lean into the crib to go to sleep. However -- and this is a big however -- she would wake up several times a night. Not always, but about 85% of the time, our sleep would be broken up by a crying kid in need of a pacifier. Once she got the pacifier, it was out like a light for a few hours most nights. But then there were the odd ones where she would wake up 5-7 times. Exasperated, we would try and take turns, though who is keeping score when you're in the middle of a deep sleep cycle and can barely tell what's going on outside of your own head? 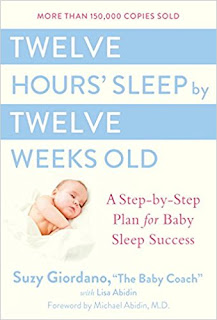 And then the other day my wife mentions that Waverly is almost two years old and still not sleeping through the night. Really? Wow... I thought, as it hit me that Ellie was far past this point at her age. Like I wrote, kids are different, but man, shouldn't she be sleeping soundly by now? For our sake and hers. Age kind of gets away from you after the first child. For your first, you are acutely aware of each month and milestone. "Oh, she's 7 weeks old...14 months..." Then, after two years, it kind of dies down. Of course, we had Waverly when Ellie was 21 months, so maybe we just couldn't keep track anymore -- I have heard mothers say her child was 32 months before...c'mon, that's too much.

Anyway, two nights ago, my wife decides to leave a closet light on with some books in Waverly's crib when we put her down for sleep. She typically fights this time of night, her energy really boosting once the lights go out. But on that night, she didn't make a sound outside of "reading" her books. The night went on, she slept, and that was that. It's been three nights of this, and it has worked every time. And so I wanted to write this whole thing to encourage all the parents out there to keep experimenting when it comes to your daily routines. Don't just accept things like a bad sleeper or a child who won't eat vegetables, because there might be a solution that will save both of you a lot of heartache, and will likely be healthier for everyone in the long run. I guess the same thing applies to life outside of parenting, so if that's you, congratulations for reading so far into a blog post about parenting, and hopefully it is now worth your while!
child children cycle deprivation differences different first parenting second sleep sleeping stay at home dad stay rad dad