December 17, 2018
Point Dume never disappoints. Even on flat days, the cove is beautiful enough to captivate and inspire. I've only been three times, however, but each one was enjoyable, despite tiny surf the first two. My last surf session was a welcome turnaround, with head-high-plus sets. But sometimes good waves will show you things about yourself you'd rather not see, and on this last Dume day, I had one such session.

Usually when I surf I'm the guy on the outside, catching the leftovers. I'm not very competitive, and popular breaks tend to get crowded with people that will jump right in front of you to catch a wave, and then get mad at you for being in their way. I just don't like to deal with that, so I paddle where it looks half-decent and let the current take me where it will.

But during this last Point Dume session, something changed. I paddled right to the top of the lineup (This is usually highly offensive in the surf world, but Malibu is its own beast, and there usually isn't a traditional "lineup" per se), partly because of the way the cove is shaped, but also partly because I wanted to catch good waves and was feeling confident. I remained relatively humble, however, and let a few go by, watching for the best spot. After letting some go that I should have went for (pulling back because of fear on steep waves), I eventually caught an awesome, long right-hander, the kind that I call "cost of admission waves" -- if you don't catch anything else the rest of the day, that wave was worth the drive, the paddle out, the crowd, the wipeouts; it's just that good.

I took my time on the long paddle back and decided to camp out in the outside-to-middle of the cluster of surfers. The lulls between sets were becoming long, but eventually my wave came. The problem was, there was a guy right in front of me who could have also caught it. And then, in a sneaky move, I paddled to his inside and jumped up, stopping him cold. "Inside man gets the wave" is a well-known rule in surfing, but I had just forced myself into that position in a way that just didn't feel right.


Fast-forward a few sets later, and I went for another wave. I think there was a guy in my peripheral that had already dropped in, but I took it anyway and just pumped my way forward as fast as I could to try and get out of his way. This is a total jerk move in my opinion, though it is fairly acceptable in Malibu. See for yourself -- just watch any Surfline camera on a Malibu break and I guarantee that the first wave you see will have 2-4 guys on it at a time. It's ridiculous and something I speak against often, but here I was, committing the same crime I condemned.

To be fair to myself, these waves were breaking in such a way that often 2-3 people could ride it without running into each other, but still, I went against my own principals to catch a wave. It was a good one, by the way, long and fun; but still, was it worth the cost of my integrity? And so, at the end of the session, I just felt kind of weird. Usually I have this huge high after a bunch of good waves; really, even one wave will keep me smiling for half the day. But after this surf, I just felt kind of...icky; like the way I surfed wasn't good for my soul. Maybe I'm just being overly self-critical, but I think that this is a good thing to be sensitive about -- the way you treat people, the habits you create and how both affect your inner-life, your soul.

Probably one of the reasons I am thinking this way is that I have been reading Judah Smith's How's Your Soul?, which explores how important our inner-self is to holistic health. The book has been great so far, and I highly recommend it, though I'm not finished yet. I guess the principals are working though, since I felt such a way after what otherwise was a huge session for me. 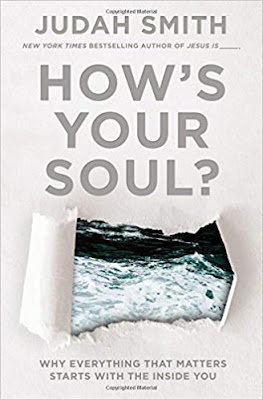 One of the waves I got, a mediocre one, was basically handed to me by this Australian guy. He was on the inside, but I was paddling anyway, just in case he didn't catch it. He was completely in position, but nodded to me before he took off, letting me have the wave. I jumped up and rode it a little -- it was a closeout I think. Later on, I saw him do the same thing for someone else. "You're a nice guy," I told him. "I would have probably just dropped in and tried to get ahead of him." He just smiled and said, "Oh."

Realizing how my own confession landed, I added, "Of course, that usually just makes me out to be a dick." He laughed, but it all has me asking myself: what kind of surfer do I want to be? The kind that paddles in front of people to get the most waves he can, vying for the "first" position (in the technical sense) with a sly shift, but essentially stealing waves? Or do I want to be the guy that goes without, letting others have the rides and picking up whatever I can when I am in the right spot? The latter is my usual M.O., and though I don't often come away with quite the quantity of rides, I usually have more fun. I sure don't want that to change.

When we got back I confessed my feelings to a friend, and added that I didn't understand how people can surf and act that way all the time and not feel bad about it. "If you do anything for long enough, you eventually become numb to your conscious," she replied. May you and I never get to this point. Always be sensitive to your soul and how your actions affect it, as well as other people. Because in the end, a few more rides, a little more money, having more control or getting there a little faster won't be worth it if your soul has been slowly dying along the way.

What does it profit a man to gain the whole world, yet forfeit his soul? Or what can a man give in exchange for his soul? (Mark 8:36-37)