May 13, 2019
The other day my Dad sent me a picture of my future step-brother-in-law's college graduation. We went to the same school, but I missed my ceremony because I was driving back from my last semester at the Los Angeles Film Studies Center. I didn't really get too involved in my college, having gone to another one my freshman year and also being a commuter, so I didn't feel terribly connected to the school. However, seeing the picture made me ask myself, Did I regret anything about my college experience? Would I have done something differently? 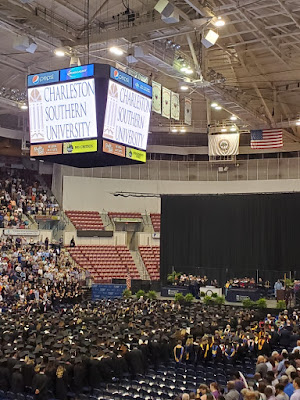 I think regret can be a dangerous thing. I remember having a friend in high school tell me he never regretted a single decision he made. How he could go through life not wanting to do anything differently? Even at this young age, I felt I would have liked to have done some things over again. It has taken several years, but I am only recently understanding the wisdom in his statement.

Still, I reflected for a moment, and couldn't really think of something I would have liked to have done more -- at least enough to alter what had actually taken place in my life. I was really blessed in college, despite working for most of it and not really investing in my school. I got to study film, worked at a local television station, made a feature film with a friend of mine and ultimately ended up in Los Angeles. My school also led to me meeting my wife, which of course means I wouldn't have changed anything.

I did decide, however, that I wish I would have hung around on campus more. I spent most of my college driving to class, going to class, and then either eating/sleeping in my car or driving back home or to work. Most of my friends were from the first college I went to, so I stuck with them, which didn't make my actual college all that fun to attend. Still, take the good with the bad and learn from mistakes I guess. That's all we can really do with regret anyway, right? Learn from the mistakes and press on, a little wiser than before, but without that nagging feeling that living in the past can leave behind.