It's a strange time to be alive, isn't it? A volatile election season amidst a pandemic, not to mention continued effects of climate change and racial tensions the likes of which we haven't seen since the 1960s. It is no secret that we are all affected by these things, and all of it seems to polarize people one way or the other.

This election season I had the enlightening privilege of living in both liberal and conservative regions at the height of campaigning -- Los Angeles and two cities in The South. My biggest takeaway: so much of what we believe is based on perspective. And our perspectives are dependent on a host of factors, region being just one of them, but an influential one at that. You already know which regions promoted which party, but something I was reminded of through listening to both sides, is that there are usually good reasons people believe what they do. When we forget that simple fact, it becomes a lot easier to villainize whoever believes differently than us, creating the "us vs. them" mentality that is so prevalent in our country today. 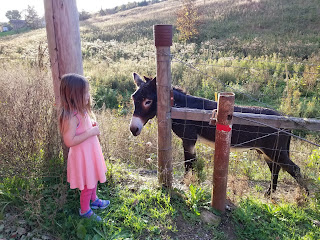 Furthermore, as we learned from The Social Dilemma and the Cambridge Analytica scandal, even information we seek out as a "neutral" learner is being skewed by the search engine itself! If I type in "Trump" on my search engine, it will likely come up with different results than if my dad does this on his computer. It was a potentially well-intentioned tool that is now only further polarizing our country.

So what do we do in response? Throw up our hands and claim that all news is fake, nothing is real?! Sometimes I feel that way, honestly, but of course that isn't a healthy response. No, the point I am trying to make is that, since so much of your bias (and everyone has bias) is based on your perception, which is influenced by your region, your family, your job, your upbringing, and so-on, you must listen to the other side with empathy. They are not your enemy, but rather people who are just as influenced by their surroundings as you are.

Think about it: we all really want the same thing, right? A prosperous and safe nation, a world that is better for our children and their children and their children's children, peace. We have different ideas of how to go about it, but no one side has it all figured out (though we often act like we do). Only in working together, crossing lines, seeing each other as humans instead of enemies, will any progress be made. The polarization is not helpful, and the more divided we are, the worse off we will be.

This takes a great degree of humility, and a fierce biting of the tongue, but understand that when someone speaks and you disagree, there is a likely good reason he or she believes what they do. Seek to know what that reason is, and they will look far less like an enemy and more like a fellow human being, and maybe even eventually a friend.