September 04, 2017
I recently reclaimed my role as Stay-at-home Dad, and I have to say, it feels good! For our oldest daughter's first two years I worked from home part-time, and watched her (full-time). It was difficult for a lot of reasons, most of them having to do with societal norms and dads not being primary caregivers. Even in liberal California, I spent many mornings at the park with more nannies and moms than I ever cared to hang with. Of course they were all very nice and fed Ellie tons of snacks (both my kids love to eat), but I still found it hard to deal with the lack of men I could relate to. Occasionally I would find a father at the park, usually on his day off, but as my mother-in-law recently noticed, sometimes dads kind of suck. Half of the time they spend on their phone while their children either dangerously hang off of high ledges or cling to their father's legs, begging for attention. Women are not immune to this, of course, but I'm just saying -- I see it more in dads.

Despite being a challenge, I found the whole experience deeply rewarding as I came to know my daughter extremely well, and had so many good memories with her. We were close, and I wouldn't have traded that for any career. And so when we decided to move to the South, I wanted my wife to have the same experience. We switched, and for a year and a half I worked like a dog to try and provide for our family. Well, despite the effort, it still wasn't enough. They say a single-parent income is nearly impossible these days, and I guess they're right. I like to blame the system/culture and the expectations we have set up for what encompasses a "comfortable lifestyle." Nonetheless, we needed a little more. Still, God brought us through a whole 18 months without losing our shirts, and now my wife, a modestly-paid teacher, will carry the financial burden of our family, with a little extra help from my part-time job and some freelancing.

The decision wasn't strictly financial though -- I really love being home and am quite good at it. I write and make music and videos, all of which provide additional income that I can generate from home; but I'm also a good dad and really thrive here. Cleaning, cooking, fixing things -- I feel very at comfortable in this role. My wife is also an incredible teacher and missed inspiring the youth to be better people, something she feels passionate about. And so here I am at home while she works, and like I said, it's working. 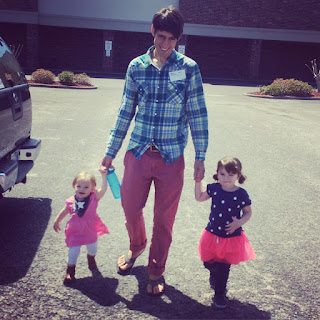 But if California had its challenges with being the stay-at-home dad, you can imagine what it's like in the South...the parks are laden with women, mostly mothers and grandmothers (not as many nannies). It's fine, I can deal. I have a lot of support and when you're at the park, most of the time you're chasing your kids around anyway. But again, some dads to hang with might be nice...

As I mentioned earlier though, dads don't have a good track record of "being there." I help out with the youth group at my church and on one telling Sunday, half of the kids in my small group either didn't have a good relationship with their distant fathers, or hadn't even seen them in two-or-more years. HALF! Fifty percent! That is unreal and unacceptable. That is why a good friend of ours from the same church constantly reminds me that what I am doing is important, and even though I often feel a bit isolated, people need to see that a father is far more than just a paycheck. As my wife often told me in California, providing for your family involves way more than money.

A few people recently told me to start blogging about being a stay-at-home dad; that it would be an interesting topic and a unique perspective on parenting. It's something I have done for years (search "dad" on this blog and you'll see some of my posts), but when I hear the same thing a few times over from different folks, I usually give it a go. So I'm kicking it up a notch and you can expect to see more posts about fatherhood, particularly staying home with the kids. Hopefully you'll catch a laugh and, as I often write, maybe get a little inspired.
california caregiver dad father fatherhood home kids norms society South stay at home stay rad dad stay-at-home work